The primary question for this exhibition addressed how the public views art made by prisoners. This question evolved out of my experience in teaching art in several high security prisons. The first prisoner I met, surprisingly, was a man named Fred who received a MFA from Tyler School of Art. He is situated in a remote Ohio prison, serving a life sentence. Together we have had many intense conversations about art and making art. I asked him once, “Do you think anyone, other than your family and friends, experiences your work without putting it into the context of “prisoner art?”

He answered, “No, and that is why I never put my work into prisoner art shows.”

It was out of our conversations that I developed this show. When I met Fred, we coincidentally were both working on 6” circle paintings. 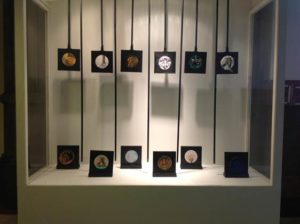 In presenting this exhibit, I wanted the viewer to experience this anonymous art beyond viewing it on the wall. I wanted the work to invade the space of the viewer. I decided to hang the paintings in row formation, thus, making the backs visible to the viewer.

Not wanting to leave the backs blank, I, therefore, attached the art sent to me from prisoners all over the United States – I have contact with a network of 2300 prisoners through Prisoner Express, living in various US prisons to whom I write on an on-going basis.

The relationship between the circle and the back of the frame is random. On the framed backs of the circles, I used this prisoner artwork, some of my own artwork, and letters I received from prisoners. For example, on the back of one frame is the varnished letter of Gabriel, a prisoner living in solitary confinement and to whom I sent a copy of Rilke’s poem, The Possibility of Being. Gabriel writes to me: “I want you to show me the “possibility of being.” I could do it myself, but you have more experience. That is all.” The story creeps in. I don’t know if Fred’s art will ever be seen as “art” or “prisoner art.”